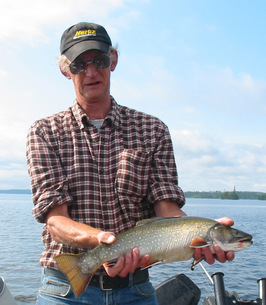 It is with great sadness that we announce the unexpected passing of Mr. Paul Joseph Victor on February 5th 2022.

Paul shared 52 years with his wife and best friend Valerie Victor. Paul and Val were inseparable. They enjoyed many fishing trips together, travelling to Vegas with friends and family and hanging out in Paul’s Garage!

Paul was immensely proud of his son Cory (Stacey). Cory and Paul shared many of the same hobbies and interests. They could always be found on the lake fishing together, as Paul was an amazing angler. Paul enjoyed watching his grandchildren share the same passion for the outdoors as he did. Papa always took every opportunity to share teachable moments with his cherished grandchildren.
Davin, Avery and Trevin looked up to their Papa in all aspects of life and knew he was just a short drive down the road. As the saying went, if Papa could not fix it, nobody could!

Paul was born to Bill and Cecelia Victor on October 17th 1948 in Fort William. He grew up with his older brother Peter and younger sisters Patty-Anne (Scott Dean) and Jane.

Paul grew up in a family where he was always surrounded by music. He was known to play the piano at many family gatherings with his uncles and sister Jane. Paul was very passionate about his band and loved performing for others. He was an accomplished pianist, winning many musical awards. Paul apprenticed at Heintzman Piano Factory for 4 ½ years tuning, rebuilding and refinishing pianos. During this time he supported himself playing the organ for various hockey games at the Maple Leaf Gardens.

His love for music led him to opening his own business, “Paul Victor Music Studio” from 1970-1990. Afterwards he continued his successful business throughout the city and surrounding areas of Thunder Bay, up until his passing. Paul’s expertise in piano tuning was sought after by the musical program at Lakehead University, The Thunder Bay Community Auditorium, various musical events within the city and many community members.
Everyone who was lucky enough to know Paul, knew he was a man of many talents which was evident upon walking into his beloved garage. Friends and family knew the garage was always open for beverages, laughter and were always prepared for Paul's skilled and witty sense of humour.

At Paul’s request a private gathering will be held for family and friends at a later date. In memory of him, donations can be made to the Heart and Stroke Foundation of Thunder Bay.

Paul fully enjoyed his life and lived each day to the fullest. He will be sadly missed by all.