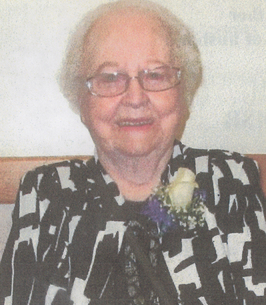 Thelma Marie “Tootsie” Kergoat (nee Ball) a resident of Hogarth Riverview Manor passed away peacefully in her sleep on June 11, 2022 at the amazing age of 105.

Thelma was born in Fort Frances, Ontario April 24, 1917 and following secondary school pursued a career in nursing. She graduated from the Misericordia General Hospital School of Nursing in April, 1940 and earned her registration certificate from the Alberta Association of Registered Nurses in November of 1945. While nursing in Edmonton, she met her husband Henry (Hank) and they lived most of their married life in Kitchener. Approximately two years after Hank’s passing in 1992, she made her final move to Thunder Bay where she resided at Paterson Court until 2017. Wherever Tootsie lived, she made friends easily and that certainly continued during her years in Thunder Bay. She loved children and animals, especially cats and appreciated receiving photos of her many great nieces and nephews which she displayed proudly in her room at HRM. She was very well travelled and some of the adventures that she spoke of often included trips to Hawaii, Barbados, Mexico, Australia and Alaska to name a few. She loved to play cards of any kind but you would never have to ask her twice to play a game of bridge, a game at which she was proud to have excelled. Tootsie was a great story teller with a quick wit; she always had a joke or two tucked away for the enjoyment of the staff at HRM. She was a charitable person and a woman of faith who cared deeply for those in life less fortunate than herself. They say with age comes wisdom; at the age of 105 it was evident that she amassed enough wisdom to provide advice whether or not one had asked for it (take that with a smile Tootsie … no harm intended).

The family would like to extend sincere thanks and gratitude to Dr. Garron and the staff of 6 South at HRM for the exceptional care Tootsie received during her residence there. You are very special people tasked with the care of those at their most fragile and for a job well done the family is grateful.